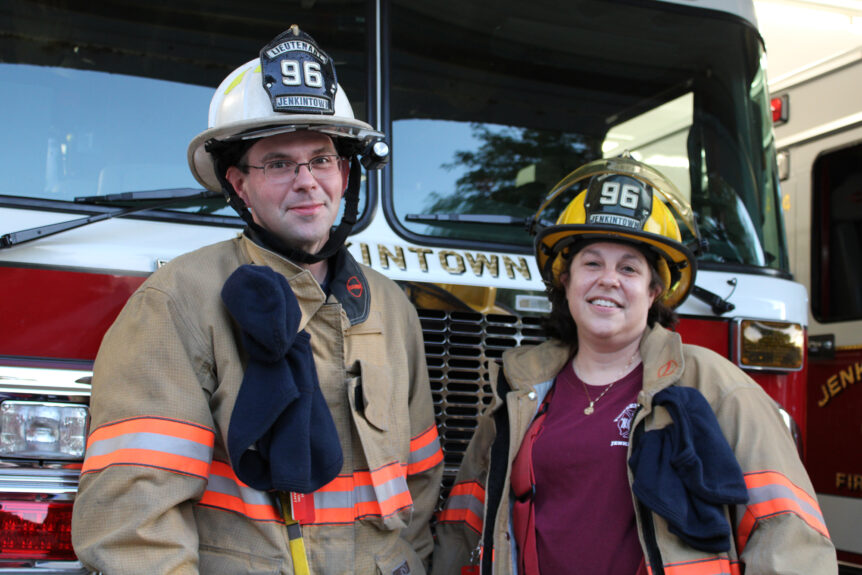 One Thursday evening in May, while sitting outside Jenkintown’s Pioneer Fire Company, Scott Smyth asked Annabelle Moreno to dinner.

The firefighters were chatting after training, and one of the members was wondering how to ask a woman out. To demonstrate, Scott posed the question to Annabelle, and she said yes.

Later, he asked her if she was joking. She wasn’t.

They went to dinner the next night—May 2, 2014—and have been together ever since.

Scott and Annabelle have both volunteered with Pioneer for over a decade: 17 years for Smyth, a lieutenant, and 11 years for Annabelle, company secretary and member of the executive board.

They met at the firehouse and were simply friends and colleagues for a while.

“We made a point of spending time together,” Annabelle said. “Even if it was just firehouse related, we always spent a little bit of time together every time we saw each other.”

And since that evening six years ago, they have maintained their love through the highs and lows, the trials and tribulations.

An early test in their relationship was an injury that ended Scott’s career as an EMT, less than a week after they got together. Annabelle cared for him. After all, as she notes: “How do you not help a person in need?”

When they married, they did so five years to the day after their first date—May 2, 2019. In Jenkintown’s town square, of course, with their Pioneer family in attendance. They even took a fire truck to their reception at Upper Crust Pizza.

Annabelle has called Jenkintown home nearly all her life. Her parents were immigrants, and when she was in second grade, her father passed away. The community was there for her family when they desperately needed support.

“Now I get to give back,” she says. “Unfortunately, in this line of work, you’re seeing people sometimes on their worst possible day. So to be able to be there for them, even if it’s just a face that they recognize. . .I feel that that makes a tremendous difference.”

Scott isn’t originally from the borough. He spent much of his childhood in Philadelphia and moved out of the city in sixth grade. He became a firefighter at 17, but his interest in firefighting came much earlier.

“It’s just in my blood,” he says. His uncle was a battalion chief for Philadelphia Fire; his cousin a battalion chief in Horsham. As a child, Scott lived near a fire station in the city and visited frequently. “I have always felt the need to help. Didn’t matter to me if I was making a paycheck or not—that’s all I wanted to do.”

At 18, he joined Pioneer Fire Company, working his way up to lieutenant. As for Annabelle, she initially lent a hand in an unofficial capacity, driving chase cars and helping with parades. “You might as well join,” she was eventually told, and so she did.

They’ve learned together over the years about how to balance their firehouse lives and their home lives.

“It’s actually easy,” Scott says. After all, they did start out as friends. “You know, when the pager went off, we weren’t boyfriend and girlfriend. I was her lieutenant and she was a firefighter, so the relationship stopped.”

Annabelle and Scott work to keep the stresses of firefighting out of their personal space, and vice versa. They have to be a team—both as volunteers and as husband and wife.

And they both think that their service has made their relationship even stronger.

Annabelle explains: “If one [of a couple] is in the fire service, the other tends to feel neglected because they’re getting up from meals, or they’re running out of family events. It always feels like somebody else’s family is more important.

“With us, we’re both headed in the same direction.”

As volunteers, the fire company isn’t their day job. Scott works with an automotive paint supplier in Chalfont, Annabelle as the manager of a dental office in Abington.

They continue on as firefighters, though, because it’s important to them. The members of Pioneer Fire Company are like a family, and both Scott and Annabelle want to continue to give back to their community.

It can be challenging to make time to volunteer. Work, family, and other external responsibilities can be a barrier to participation.

But Scott and Annabelle encourage anyone interested to at least give it a try.

“Come out one night, see what it’s all about,” Scott says. “The main thing is giving back to your communities helping others in times of need.”

Annabelle adds, “Start off small, a couple hours on a Thursday night, and go on from there.”

The benefits of volunteering are numerous: new skills, exciting opportunities, strong friendships. And this Jenkintown couple is living proof that what you might find at the firehouse can change your life.

Ever since their first date that one May evening—and even before—they’ve had each other’s back, both in gear and out of it.

“If one of us runs out the door, the very last thing we say is, ‘I love you; be safe,’” says Annabelle. “And that’s something that we’ve never failed to do in six years.”

Fall in love with firefighting as a volunteer with Jenkintown Fire Department. The Pioneer and Independent companies are seeking adult and junior firefighters, fire police, and contributing members. All training and equipment is provided free of cost.

Get started today at www.fightjenkintownfires.org.